Each year, our Earth Science Department in Oxford has a Christmas party which incorporates, amongst other things, a cake competition.  Each research group makes a cake that is in some way related to their work. The palaeontologists have always been something of a diminutive group, and have been considered the underdogs in the department, but with the arrival of three new members this year we are growing strong.  We decided to take on a mammoth task with our cake – to represent the evolution of all life, from the first cells to humans, on a gigantic spiral cake.  This was the inspiration: 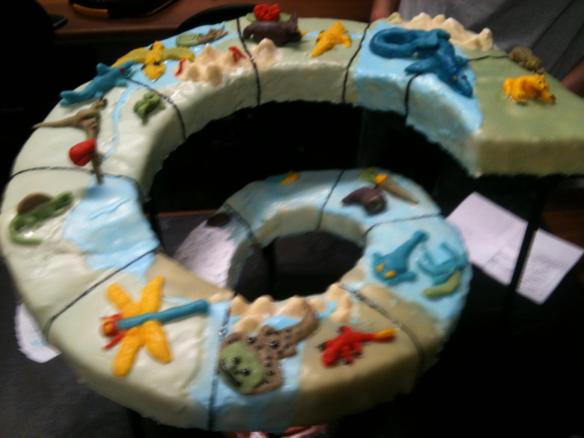 This photo isn’t really the best, and there are lots of things I would like to draw your attention to, so I have made a lovely video for your watching pleasure. You can find it *here*.

Anyway, we were all supremely happy with what we produced, which was just as well because we didn’t even win the competition.  Not that I’m bitter about that at all….  It would seem that when a cake is being judged on both style and taste, you can’t rely on a thoroughly manhandled multi-bake cake and marzipan to clinch the deal.  Never mind.

I plan to hand in a less edible version as a diorama alongside my thesis.  Pretty sure it will boost my approval?