“Ooh you all look like you’ve been dipped in glue and rolled around a vintage clothing store!”

Never was a truer word spoken than by compere Jamie Anderson, opening the inaugural London Cabaret Awards on The Battersea Barge last week. The boat was crammed to the ceiling with glitter, wigs, false nails, false lashes, false boobs and genuine smiles, and all were clearly determined to make merry with friends old and new. As new London Editor for Broadway Baby, it was my pleasure to be a part of it, even given the personal nightmare I had in getting there.

I had a business meeting during the day, so had come to London in normal enough clothes, but with a bag full of corsetry, stockings and feathered epaulettes. After a struggle into the steel-boned creation in the loo of an extremely overcrowded Costa on Shaftesbury Avenue, I set off on the ill fated journey across London. Wisely, I had decided to put on the heels and the epaulettes once I was there, but the corset did little for my mobility, at speed, through the subway at rush-hour. Following an extensive detour owing to severe delays on the Picadilly line, I eventually arrived at Vauxhall with twenty minutes to spare before the beginning of the champagne reception. I walked.

Being a barge, I knew it was on the river, and my rough mental map told me in which direction to walk. It didn’t, however, tell me how far to walk, and just how much of that would be along a dual carriageway. In a corset. Finally spotting a sign advising me to turn right for the Battersea Barge, I did so, and was heartened to see a number of taxis dropping off revellers. Good, I thought, I’m going in the right direction. Carrying on, more taxis and even a tour bus with blacked-out windows passed me. Gosh, I thought, this is a fancy affair. All this time I am walking through what seems to an industrial estate, with cement lorries, and refuse trucks. Very ironic, I thought. But the road took me right up to Battersea Power Station, where there was a huge queue and a great many photographers. I even think I was snapped a couple of times in my ridiculously overstated outfit, before I realised that this was, in fact, a completely different event and I was, in fact, nowhere near where I wanted to be. By this time it is fifteen minutes into the champagne reception and I am lost on an industrial estate in Battersea. In a corset. I walked.

I spent the next 45 minutes walking, investigating every alleyway and signpost until I eventually found a teeny tiny sign that directed me down a labyrinthine set of walkways which, eventually, led me to the Battersea Barge. Already exhausted, but determined to go through with my extravagant outfit, I slip on my heels and prepare to put on my feather epaulettes – only to find them gone. Somewhere, somehow, in London I have lost a pair of black feathered shoulderpads. Kind readers, if you find them, pity me and my bare shoulders in an industrial estate in Battersea, in a corset.

By the time I made it onto the barge, the champagne was finished, the guests were already pleasingly drunk, and the awards were about to start. No one noticed my shockingly bare shoulders, for which I am glad.

That was enough of a fiasco for one night, and the Cabaret Awards did not disappoint with extravagance, fake eyelashes or inebriation. Hosted by the quite delicious Jamie Anderson through choppy waters, the show and ceremony was underway with much whooping and heckling, as could be expected from a cabaret audience made of cabaret performers.

Awarded first were the glass stars for the best drag act, to Jonny Woo, the best burlesque performer, to Kiki Kaboom, and the best cabaret venue, to the Royal Vauxhall Tavern.

There followed a wonderful set by the Four Femmes on the Thames, a 40’s inspired music act reminiscent of the Puppini Sisters. With tight satin frocks and tighter harmonies, the four girls oozed charisma and thinly veiled drunkenness, and their performance was a real treat.

The Four Femmes on the Thames

The next set of awards went to Dicky Beau, for best alternative performer, and to Mat Ricardo, for best speciality act. Zoe Charles, teacher at ‘The Cheek of It’ burlesque school, was awarded the unsung hero award.

Following a brief interval, Mr B the Gentleman Rhymer treated the audience to his special brand of ‘Chap Hop’, accompanied by a miniature banjo and a spiffing moustache. Mr B was a hug hit on the Edinburgh cabaret scene in 2011, and both he and yours truly hope he will be recognised for an award next year. 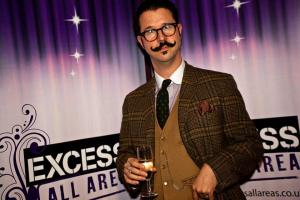 Mr B the Gentleman Rhymer

More awards, to the Double R club, for best ongoing production; to Dusty Limits for best compere; and to Bourjeois and Maurice for the catchily titled best music-based act, were heralded with renewed vigour by the thoroughly inebriated audience.

Josephine Shaker provided the final break in the proceedings, tapping her heart out on a thoroughly sick-making stage, performing a fascinatingly androgynous strip, and being generally ignored by the increasingly rowdy contents of an increasingly crowded barge.

The final awards, almost drowned out by good natured heckling were, for best one-off production, to La Soiree, for the Time Out Audience award voted for, unsurprisingly, by the audience of Time Out, to Alp Haydar, and finally the Outstanding Achievement Award, to a seemingly very deserving Duckie. The crowd simultaneously climaxed, and Jamie Anderson’s closing comments went unheard and unheeded. A song to end the night affirmed an excellent time had by all.

Yours truly had to rush off to catch to the last train home, much to my chagrin, for there is nothing I love better than an alcohol and burlesque-fuelled afterparty. But despite the dramatic failure of the first part of the evening, the awards themselves were a gin-soaked romp, and as one particularly drunk burlesque nominee announced, “We are all winners”. I look forward to many more cabaret awards, with the continued blossoming of the London cabaret scene. I even know where the bloody barge is now.